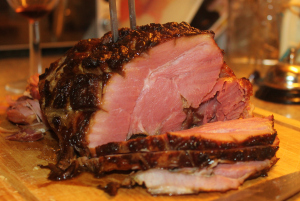 I’m not going to lie to you, I actually cooked this ham over the Christmas period but I felt if I blogged it just after Christmas it would look like a late Christmas recipe, so I have been waiting until the right time for people to not think I’m a cop out. In all honesty there is never a bad time for a sticky gammon recipe, this can be enjoyed all year round; as a roast, in salads, pies and sandwiches – I have no idea why I waited so long to post it!

I also have to confess that this recipe is not a hmwm original, but was infact inspired by the Kitchen Goddess Nigella Lawson. There are a lot of versions of ham cooked in cola, but I believe Nigella’s is the original so I have to pay my respect to hers, as the idea is genius – if you don’t believe my you’ll just have to try it for yourself!

For the sticky sweet glaze

Place the onion at the bottom of a large lidded plan and place the gammon on top.

Pour over the cola so that the gammon is covered and add the bay leaves to the pot.

Bring the pan to the boil, half covered and simmer for 2 and a half hours.

Meanwhile, preheat the oven to 220’C

Once the ham is cooked, drain the liquid and remove the ham from the pot

Remove the skin, leaving a thin layer of fat and score the fat with a sharp knife to make crisscross diamond shapes across it.

Stab a clove into each cross

Mix together the treacle, mustard powder and sugar and spread this all over the gammon, patting it well into the skin.

Transfer the gammon into a foil lined tin and cook for ten minutes.